Let’s be real. The last few years in politics have been somewhat eventful. Our favourite decrepit old men in the front seats of world politics have been finding new ways to manipulate voters – one such way is screaming about ‘voter integrity’. What is it? And how are these greedy grandpas using it to put a few more dollars/pounds/big macs in their pockets?

Voter integrity is a concept that generally refers to the quality and reliability of the electorate (the voters) and the results gained from elections with respect to that electorate. Sounds good right? Voter suppression on the other hand refers to the influencing of an election through the discouragement, intimidation, or disenfranchisement of certain groups in the electorate.

Though voter integrity sounds like a fancy almighty historical concept, the term only really became popular after Obama’s election in 2008 – and for worse reasons than one would assume. With a minority standing as the presidential nominee for one of the two large parties in the US (the first presidential nominee of the two main parties to not be an old white man), it became something of a call for minority voters who usually wouldn’t vote to partake in the election and as a result, 5 million more ethnic minority voters turned up to vote compared to the 2004 election.

Despite this victory for voter participation, a tainted ‘voter integrity’ movement started to gain speed over the next few years and key legislation was gutted such as the Voting Rights Act, civil rights era legislation whose original purpose was to prevent racial and racially charged barriers to voting such as ‘at-large voting’ or racial gerrymandering which is explained in the diagram. This enabled states such as North Carolina (which is ironically in the south for you non-American readers) to attempt to pass racist voter ID laws that were championed by the very same voter integrity movement, such laws were promptly denied by federal courts due to the law targeting black voters with ‘surgical precision’. A diagram of the very gerrymandered districts of North Carolina is also featured below. 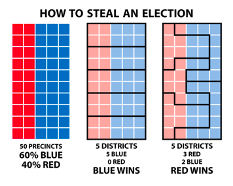 Voter ID has been a hot debate topic in some countries which may seem strange to some Europeans who are used to being required to show ID in order to vote. The most common form of ID people carry in the UK and the US is a driver’s licence but these and other ID forms like passports or official state identity cards often prove unaffordable. People who may have just scraped together enough money working ridiculous hours would, if they decide to actually get an ID, have to deal with inane bureaucracy that they may not have time for due to their job. There may be kids to feed and send to school, bills to be paid, winter is on its way so the heating will be more expensive, the public transit system may have been defunded by some corrupt mayor looking for political points through ‘saving money’ so a car will have to be paid for, in the name of austerity the taxes went up, etc… The story continues and it gets bleeker (not to mention the bloody global pandemic). In cases like this, voter ID means disenfranchisement on the basis of financial wellbeing and in some circumstances where the racial-economic divide is very real such as inner-city areas in the US or UK, it means disenfranchisement on the basis of race.

It’s all too easy when living in Europe to believe that the US is some sort of hellhole but in reality, this type of stuff is happening everywhere, even Sweden has been investigated for problems with ballot secrecy. The Conservative Party in the United Kingdom carried out trials with voter ID and despite the talking point that it would increase voter integrity, there were only 28 allegations of voter impersonation in the 2017 general election and of those only 1 was found guilty. Within the voter ID trials, 0.14% of eligible voters were turned away due to lack of valid ID, over a quarter of which didn’t return to cast a ballot. When thinking in terms of the British population, this is over 9 million people. When people are already so disenfranchised by politics it seems like a shot in the foot or maybe sticking a grenade in your shoe would be a better analogy, that is unless those who are being disenfranchised are the ones who aren’t voting for you…but that’s for another time.

Voter integrity, to put it lightly, is just another in a long line of societal issues that has been twisted from a somewhat innocent issue to a highly politicized and divisive pressure point. We can look back at debates over health care policy in America where some uninsured people won’t visit the hospital in fear of the bill for getting that lump looked at or migration issues in Europe and the MENA region where keyboard warriors memorize talking points to ‘share’ in the ‘marketplace of ideas’, the list goes on. The fiasco with US mail-in voting has definitely had a substantial effect on the already low opinions of many with regards to electoral and voter integrity and the effects of which we will only see in the coming weeks. Or months. Or Years.